On this page we aim to provide all the information you need to consider the Mini gastric bypass. In addition to explaining the ‘Mini’ we also draw a comparison to the traditional ‘Roux en y’ bypass. It’s likely to prompt some questions so please call our team or message us here if there is something we’ve missed that you’d like to know. We’ve included links back to the ‘Roux’ pages, so you can easily switch back if the Roux is your preferred procedure.The decision on which bypass is best for you will rest with you and your surgeon, following consultation. In most cases the Roux bypass is favoured but we’ll discuss both with you at consultation.

The mini gastric bypass is an attractive alternative to the traditional Roux-en-Y gastric bypass. In fact, if you are considering a bypass or gastric sleeve then it’s worth considering the mini bypass too. On this page, you’ll find all you need to know about the ‘mini’, but the three key features are:

As with the standard Roux-en-Y gastric bypass, the mini gastric bypass works both by restricting the amount of food that can be eaten at any one time, and by altering gut hormones involved in appetite control. Mini gastric bypass (MGB) as we know it today was developed by Dr Robert Rutledge in 1997. Since then tens of thousands of procedures have been done and MGB is growing in popularity in many countries around the world. For many patients it provides a quicker and more effective alternative to the traditional bypass. Most patients considering gastric sleeve should also consider MGB too.

The mini bypass is now established in the NHS and we expect ‘mini’ numbers to increase rapidly. It offers a number of benefits over the traditional ‘roux-en-y’ gastric bypass, some of which are significant. Here are the benefits:

Am I Eligible for Mini Gastric Bypass?

The eligibility criteria for Mini is broadly the same as for Roux en y gastric bypass. We consider patients eligible for ‘Mini’ when they have a BMI above 40. You will also need to have tried other methods to manage your weight and your weight will be having a negative impact on your day to day life. Our decisions about eligibility are based on the published data for each procedure and the general NICE guidance published by the Department of Health.

You can view those guidelines here. Decisions about your eligibility are always discussed with you face to face at your consultation when we’ll discuss the pros and cons and make sure you understand which procedure is best for you personally. In exceptional cases we will consider Mini down to a BMI of 35, but never lower.

How Is the Mini Gastric Bypass Operation Performed?

In the first part of mini gastric bypass surgery, the stomach is divided, and a small tube of stomach created. The food that is eaten goes into this small stomach. This is the restrictive part of the procedure and means that only a very small amount of food can be eaten at any one time. 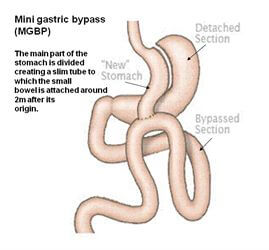 Next, the surgeon brings up a loop of bowel (about 150cm long) and joins this to the lower part of the new smaller stomach (the join is called the “anastamosis”). In this way food passes from the small stomach into the small bowel and here it meets the digestive juices which have been produced in the bigger stomach. In effect, therefore, about 150cm of small bowel has been bypassed before the calories and nutrients of the food you eat is absorbed in the bowel. By consuming fewer calories you will lose weight*.

“The Mini bypass will become a mainstream procedure in the treatment of obesity in the period ahead. It gives excellent results and a number of benefits when compared to the Roux. Both have a role to play and which is preferable will vary form patient to patient. Those looking at the sleeve should also consider the Mini. There are very good reasons, especially when it comes to managing leaks, that favour the Mini.”

How Does the Mini Gastric Bypass Compare to the Standard Roux-en-Y Bypass?

Studies show that weight loss and health benefits resulting from mini gastric bypass are essentially the same as for standard Roux-en-Y bypass. 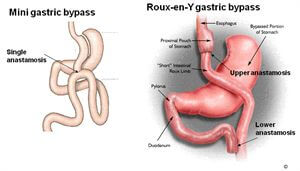 How Does the Mini Gastric Bypass Compare to the Standard Roux-en-Y Bypass?

The Mini comes with the same surgical risks as the Roux but the longer term risks are lower. There are few disadvantages and we are stretching a point to find them in the literature, but patients should consider the following; 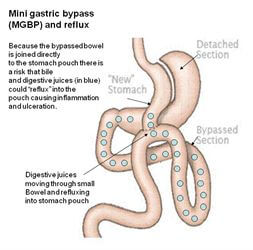 Who should consider Mini Gastric Bypass?

Patients with a body mass index should consider the mini gastric bypass alongside the traditional gastric bypass and gastric sleeve. There are now very strong argument to select mini over both. At Healthier We apply a minimum BMI criteria of 35 to sleeve procedures and we would do the same for Mini. For patients experiencing significant health problems as a result of their weight, for example Diabetics, we would still favour the Roux-en-y bypass.

How much does it cost?

The price of the Mini gastric bypass is the same as for the Roux en Y Gastric Bypass. This is because the theatre time and stay in the hospital are broadly the same. Your package will include a comprehensive aftercare and support package including surgical warranty. In order to obtain a personalised quotation and to see the finance options that are available, please request a quotation.

We provide formal personalised quotations so that enquirers are clear on what is included in our package. Several payment plans are available if you would like to spread payments over a period of time.