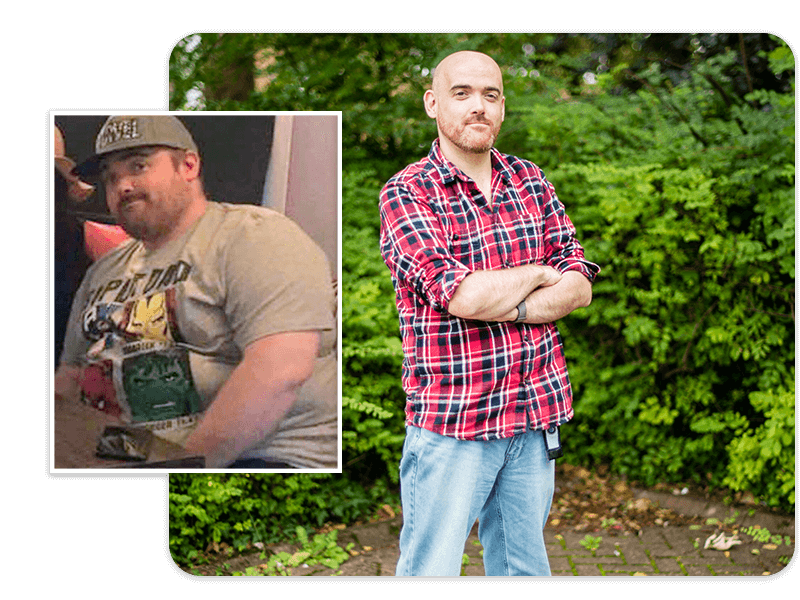 I’d tried every other diet under the sun – and I gave up on all of them. But with my gastric band, I didn’t give up, and now my life is completely different

Chris tells his story of weight loss with a gastric band.

“There is a video at home with my kids where I wanted to play with my kids but all I’m doing is lying on the living room floor and letting them run around me, that’s what my life was I was just static and everybody else’s life was just going on around me. It wasn’t a good existence.”

Relationship with food and dieting

“If there’s a diet on this planet that I haven’t tried it doesn’t exist. I pretty much tried everything, I’m talking even just simply eating right and exercising or all the different fad diets or the expensive shakes, I have tried them all.

“Some of them were successful I mean there were times when I had my head screwed on and thought right, I’m going to do this and could see the weight coming off, but then for some reason, I would completely sabotage it.

“I would go okay I’ve lost a stone this month, I deserve a Chinese and then one Chinese would turn into two or three and the weight would come right back on again.”

“The reason I chose weight loss surgery was that I had my third child on the way, and I had already missed out on the first two childhoods because I was so overweight, and with the third one coming, I thought this is the time now to get it sorted.

“I was 25 stone. I was unhealthy. I struggled to get out of bed and I didn’t want to miss out on another one of my kid’s childhoods, so that was the main reason with having my third kid coming and I wanted to be around.

“Being 25 stone you can’t mess around with that, if I stayed that weight there’s a good chance I might not be sitting here today, I wouldn’t have had that chance and I wanted to be around for my kids it’s a simple as that.”

“I did a bit of research, initially this was actually years before I went for the surgery and I made a phone call to a few different places that I found on google and Healthier Weight was one of them.

“It wasn’t like a marketing thing, it was more like here’s how we can help you, how are you doing, those certain things. So Healthier Weight was always in the back of my mind so when I made the decision that I am going to do this, Healthier Weight was the first one I went to.”

“Mr Kasem was my surgeon at the Nuffield hospital in Glasgow, I had no issues with the guy at all he was really nice, really friendly and gentle. He put me at ease right away at the consultation right through to the surgery.

“I remember one of the first pieces of advice like literally we hadn’t even spoken about the process or anything like that, and the first piece of advice that came out of his mouth was about sliders, which I didn’t even know was a thing.

“[Sliders are] basically things you can eat that can slide through your band and that has always stuck with me. Honestly, it was ‘like hi what’s your name, what are you looking for, let’s talk about sliders’ and that was me right away I had my head screwed on with it.”

“With two kids and an 8-month pregnant wife I had to recover quickly. I was back on my feet probably within a week or 2 and back doing normal things within a month.

“I do remember one instance where I was doing a disco, and I had to lift my speaker – this was a month after my surgery. I picked them up and felt this tear, but luckily had just pulled a muscle and just thought maybe I need to slow down a wee bit. But other than that, I had no issues getting back on my feet. It was quite quick.”

“Straight after my surgery I was unemployed and didn’t have much going for me, but I pushed through and now I am a full-time author. I am baffled by this, I didn’t plan on being a writer or anything like that but I am now an author. I travel the country helping people or trying to help people with their mental health, try to inspire people where I can. 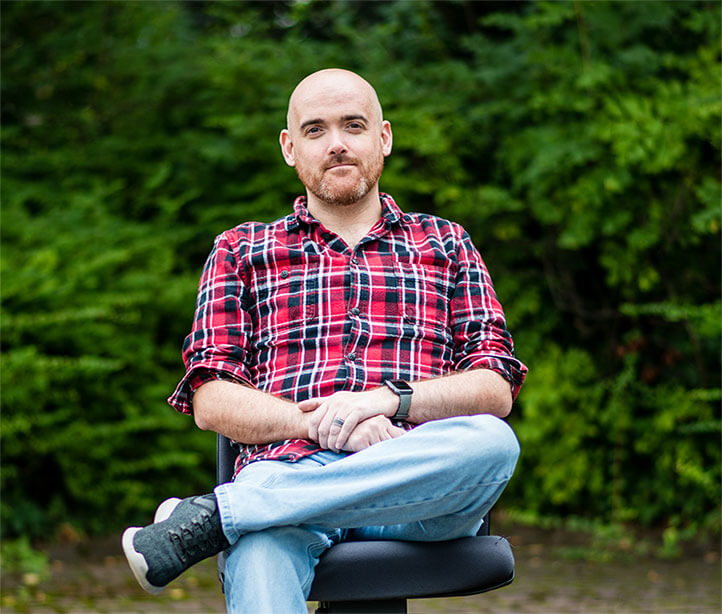 “Obviously, I’ve got three kids so I’m a dad. I used to be a radio presenter – it took me a long time to do it but I was a radio presenter. Believe it or not, I did manage to have a wrestling match, I’ve got to say looked alright in spandex as well just saying. And obviously, now I’m an author as well.

“I’ve managed to do [all of] that, and the simple message that I give to kids and that I can give to everybody is – the way I did that, I didn’t give up.

“I mentioned earlier that I got hit with postnatal depression when the kids were born, I could have given up and some other stuff but I didn’t, I fought through and I now have a very happy home. My kids are really happy, my wife is really happy and I’ve got a really happy family.

“When I wanted to do radio presenting, the radio station I worked for, I phoned them every day for a year before they even let me through the door, but I didn’t give up.

“When I wanted to be a wrestler, I had to lose weight, as I said I didn’t get fat by accident, I could have easily eaten all the pizzas or had all the sliders and stay at the weight I was, but I didn’t, and didn’t give up and learnt how to have a wrestle and have a wrestling match.

“With the book, I’ve got hundreds of unfinished stories on my computer but the one story I didn’t give up on was Lucy’s blue day, and that’s the one that I’m working with right now.

“You can equate that to anything, I know we will talk about this later on but weight loss surgery isn’t easy, it’s hard. And I don’t know sleeves or balloons or bypasses, I had the gastric band, and it was hard, very hard. And you have to fight through it and not give up.

“It has made me a stronger person in the past two years and as we said earlier, I tried every other diet under the sun and I gave up on all of them. But with my gastric band I didn’t give up, and now I’m 12.5 stone lighter, I feel great. I’m healthier, I’m happier and my life is completely different.”

Editor’s note: Chris was 34 when when he had his Gastric Band surgery with Healthier Weight.