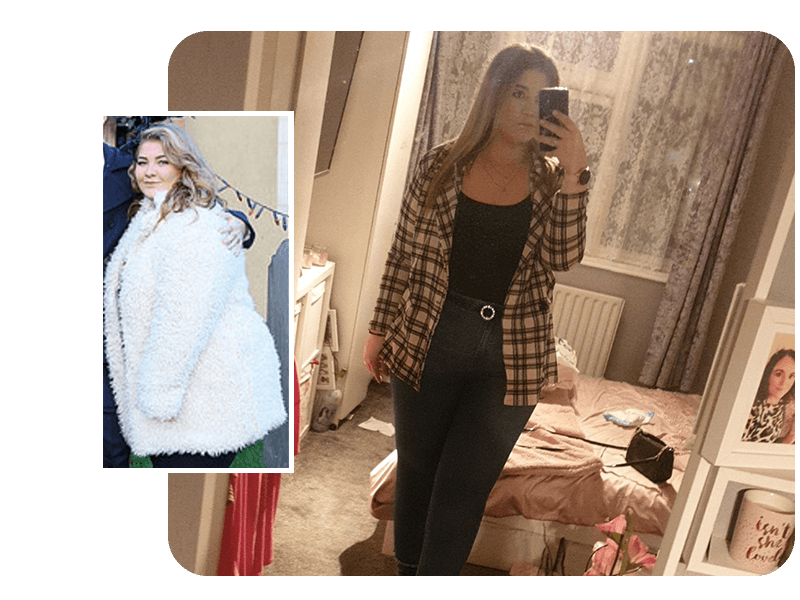 Don’t compare yourself to others because you’re different, don’t beat yourself up and be proud of what you’ve achieved

Get Quote
Previous
Next

Georgia struggled to find clothes that would fit her at her favourite high street shops. After having her gastric band with Healthier Weight in 2019, she now has to wear a belt when slipping into her most-loved pair of jeans. Less than a year after her procedure, she is already over 5 stone lighter. This is her story…

Before Weight Loss Surgery I was unhappy with myself. No matter how much I exercised or dieted, I lost a few lbs one week, and put double that back on the next. I felt depressed.

Shopping was a problem! Most high street shops only go up to size 16, I was 22-24 so there just wasn’t anything for me and the shops that did have plus size options, didn’t have clothes appropriate for my age. At 22 years of age, I didn’t want to dress in the same clothes as my gran. I had to shop online, with no guarantee the clothes would fit and limited choice. Shopping online is expensive, but it’s the only way I could find clothes I liked.

I was initially interested in a Gastric Bypass. My Mum and sister have both had Gastric Bypass surgery through the NHS. My Mum was a size 30-32  when she had the Gastric Bypass, and at her best dropped down to size 14. Even now she is so much happier and healthier than she was before surgery.

During my consultation, the Dr was lovely and advised a Gastric Band would be the best procedure for me. He explained that with a Gastric Band you can fill and defill the band to your needs, and help achieve your specific goals.

Being young I want to have children, and the Dr explained that my Gastric Band could be fully aspirated before pregnancy, so I could have a normal pregnancy, and then re-filled afterwards.

It’s been almost a year since my Gastric Band surgery and I feel so much healthier.

During pre-op I lost 1 stone, a week after surgery whilst drinking shakes I lost another stone and as I moved to solid foods, the weight loss continued at a slower pace.

2-3 weeks later, the weight loss stopped. Then I started putting weight on and I was worried I had broken it. My Mum told me “don’t worry, it’s normal”. Then I spoke to the Aftercare team and they were really reassuring, they explained it was normal, and often caused by water retention. We booked my first fill and I felt really reassured.

I’m now on my 3rd fill and I’ve never regretted my Gastric Band once, I’ve been losing 2-3 lbs per week. In May I will be 1 year banded and I’ve already lost  5 st 2 lbs.

Shopping now is so much better. I can buy clothes from my favourite high street shops and I no longer have to worry about not being able to fit into the clothes.

One of my favourite shops is Matalan, their Jeans are so much softer than elsewhere. I bought a pair of Jeans there during Christmas 2019 and now they’re too big. I have to wear a belt just to keep them up. The last time I wore jeans before that, I was in high school! So this felt like a major achievement for me.

Support from others on their weight loss journey

The Facebook Group has been a lifeline through my weight loss journey. Seeing the difference people have achieved is amazing and I bet most of those people sharing their transformations don’t realise how far they’ve come.

It’s only recently I’ve started noticing the difference in my weight loss journey, and sharing my before and after photo in the Facebook group has helped.

The best advice I could share is “Don’t compare yourself to others because you’re different, don’t beat yourself up and be proud of what you’ve achieved.

“You’re taking that first step and you’re on the right path.”

Before my weight loss journey began, I never had the energy to  play with my nieces or nephews, I would become breathless so quickly to the point I was embarrassed and I used to fob them off and tell them I was busy just to hide it from everyone.

Family is a huge thing to me, so not being able to do such simple tasks really upset me. Now it’s a whole new chapter of my life, there’s no stopping me! I run around the garden with them playing and that’s something I never thought I would do again.

Editor’s note: Georgia was 22 when she had her Gastric Band surgery with Healthier Weight.
Page last reviewed: 23 March 2020