I lost weight before it turned me blind 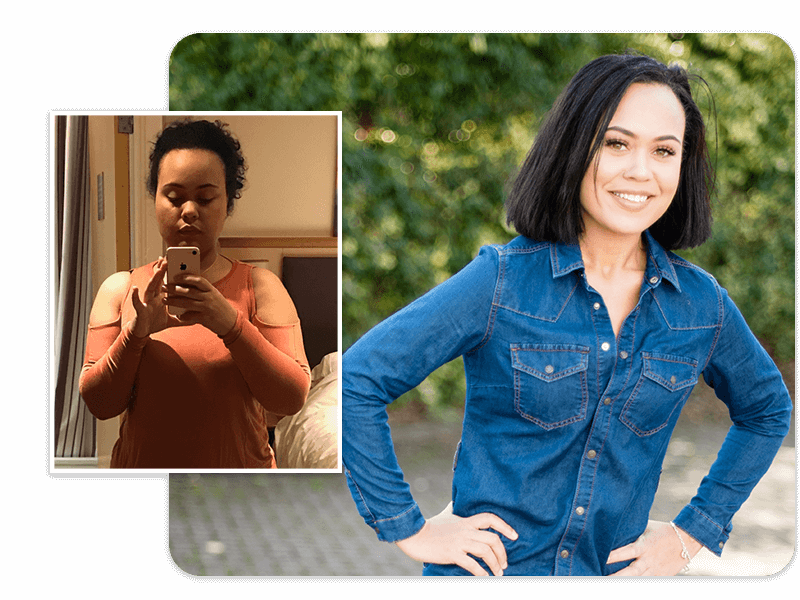 I was diagnosed with idiopathic intracranial hypertension… most commonly associated with overweight women. If I didn’t do something about it, I could go blind.

In her younger years Georgina was very active and regularly enjoyed activities such as rollerblading,  semi-professional dancing, jogging and attending the gym. However, in 2012 promotion to a new job meant hours sitting at her desk, and over the next 6 years a vicious cycle ensued. Georgina became inactive, constantly tired and she started to gain weight. She put on 5 stone and in January 2016 had ballooned to 17 stone!  At that point in her life she says she was existing, not living.

During this period of weight gain Georgina was to experience what she refers to as the scariest thing she has faced in her life, one of those pivotal moments in life. One day in 2015 she woke up as normal but simply felt  ‘different’. “Those who know, know…” – she explains “My head felt fuzzy, my vision was not as sharp as it should have been, my eyes felt like they wanted to burst and I had a repetitive ‘whooshing’ sound in my ears.”

An emergency GP appointment wasn’t very productive. She was very loosely diagnosed with what seemed to be generic “mental health problems” and turned away (without a mental health referral being made.) However she knew it was more serious. “I just instinctively knew this wasn’t the case (the mental health diagnosis), I had a good job, nice home and felt OK mentally, but the symptoms were getting worse and I was getting more and more anxious about them”

Over the next few weeks and months the symptoms worsened and in desperation she returned to the GP surgery, this time in tears only to be given the same treatment. Frustrated and with nowhere to turn  she immediately called her local optician and got an appointment that day. The optometrist looked into Georgina’s eyes and there and then gave her a letter instructing her to go to the Emergency eye Hospital. He had seen things that concerned him.

At last, although scary as it was, she felt she was getting somewhere. Several months passed, and several medical appointments and tests were completed, including a very painful lumbar puncture. And later in 2016 Georgina was finally diagnosed with a rare neurological Condition called Idiopathic Intracranial Hypertension. This a condition in which fluid in the skull places pressure on the brain. It is a rare condition and the diagnosis looked bleak, the worst potential symptom being that she faced losing her sight. She was also at considerably higher risk of having a stroke due to the increased pressure in her brain.  In short, at its worst the pressure was so high it had squashed part of her brain and was mirroring symptoms of having a stroke or brain tumour.

Although she says it was a horror to live through – she became very anxious, stopped going out in public and had no social life – she remained determined to get to the bottom of whatever was wrong with her. She had started to lose some vision in one of her eyes by the time she was moved to the care of a consultant at Birmingham’s Queen Elizabeth Hospital. During her first consultation he informed her that this condition was in the process of being researched but most patients fall into a set criteria… Female, child bearing age, overweight or obese.

The overweight tag really hurt her. After having an active childhood she had struggled with her weight on and off throughout her life. She had lost weight but like so many people struggled to keep it off. After her consultation she set about reducing here weight and attempted ‘every diet going’ only to find herself binging on junk meals after a couple of weeks. “Food was my only comfort, but it was also taking my sight away.” she says.

By the end of 2017 she decided she was going to have weight loss surgery. Being based in the Midlands she had heard of the expertise provided by Mr Rishi Singhal, NHS Bariatric Surgeon and the Medical Director here at  Healthier Weight.

The two met in early 2018 and Georgina quickly decided she was in the right place:

“This was my guy, he knew all about my condition (which was rare for a non IIH related medical professional) and put my mind at ease about the procedure. I decided to go ahead and had gastric bypass surgery in March 2018. By September 2018 I had lost 6 stone and was in remission from IIH and, best of all, with no loss of sight.”

The crushing migraines she had regularly experienced had gone as well and she was, for the first time in many years, saying yes to invites, parties and social gatherings. Through the Healthier Weight Facebook support page (an online community of 1500 weight loss patients) she met a friend who she now considers a ‘lifelong’ friend.

“The mutual support both in that group and in the Healthier Weight aftercare team has been amazing and it has gone full circle now where I feel I am now giving back to the group. When I needed support the group was there there for me and now I am able to be there for other people. It’s a great feeling.”

Now 12 months post op, Georgina is maintaining a healthy BMI. Her focus is now on getting physically and mentally stronger after being unwell for so long. Other health conditions that she has had (Hip Bursitis, disc degeneration) have eased too due to the weight loss, and as Georgina so rightfully says,  “I am able to live without the pain I suffered with for years.”