It’s a lifelong journey, but I'm so happy with the way that it's going! 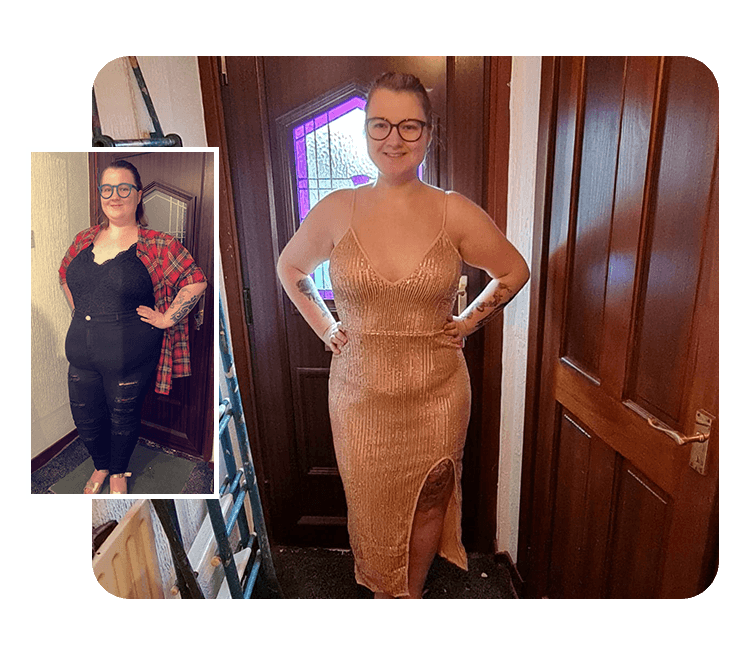 Within a year, I managed to build my confidence up enough to actually look at myself in the mirror again!

At her heaviest, Nikita was 26 and a half stone. It was after the birth of her first child that her weight problem started to become too much for her, and during the 2018 Christmas period, her battle peaked when she had a heart attack. It was at this point that she knew that she had to make a change, and so began her weight loss journey…

I had been struggling for years, and I lost 6 stone with Slimming World, but I think because it’s always three foods, three foods, three foods – although it’s just three, you can have as much of it as you want. There was never any portion control or just never any leeway of what I could have. So although I was losing weight, I found myself at a stalling point and I wasn’t losing enough to be healthy, and then when I had my heart attack I knew I needed to do something.

I have two young kids and I want to be around for them, so it was a big reality shock, especially when I went and had my consultation with Dr Ali – he said, “if you keep on going the way you’re going, you will be dead.” He was so surprised that I didn’t have diabetes and so many different health conditions. He told me that I’m very, very lucky. The only real health problem that I had was hypermobility syndrome, my knees would give way and my back was always really sore.

I was offered the NHS route but I was told that I would be on a 2 to 3-year waiting list. I don’t see why they need to put you through your paces mentally to prepare you for it, because the reality of it is that it’s hard enough knowing that you’re going to make a life-changing decision, but having to attend classes to talk about your emotions, it just didn’t appeal to me.

I’m a very private person, so having to go in and speak to several different doctors just didn’t appeal to me at all. When they said there was a 3-year waiting list, I just couldn’t do it anymore.

I did think about going to Turkey for my gastric sleeve, but the main factor for me was that I was in the UK, if anything went wrong, my mum could drive to where the hospital was straight away. It was hard because on the morning of the op, I was sat in the hospital thinking, “what have I done, what am I doing?” It was the first time I’d had such a big operation, and obviously, because of the fact that we were going into lockdown, people couldn’t sit with you or stay with you so I did feel very vulnerable.

I have to say that all the staff at Ross Hall were amazing. The nurses and everything! Before I had it there was a slight problem with my bloods, so I got myself really worked up, thinking, I’m not going to get it. I’ve psyched myself up, I’ve done what I’ve needed to do, so it was hard. A lot of it is mind over matter, which I don’t think a lot of people understand. For me, I’m glad that I had it in the UK for the sheer factor that if something went wrong, my mum couldn’t just jump on the first plane over, whereas in the UK it was just a 45-minute drive away.

Deciding on Healthier Weight and the gastric sleeve

I’d looked into a few different companies but I’d seen that Healthier Weight work with Dr Ali, who I’d seen a lot of on TV and did my research off the back of that. From that point, I knew that it was Dr Ali and Healthier Weight that I wanted to go with. And Cavell from the patient care team was brilliant! She was straight to the point and so helpful. The whole experience from enquiry to surgery was really good, I can’t fault it at all.

I knew from the get-go that I wanted a gastric sleeve, my mind was entirely made up with it. I’d watched a lot of TV programmes, including the one that Professor Ali was on and also Shut-ins: Britain’s Fattest People. I watched that and it opened up my eyes after seeing a girl on it that was a couple of years older than me when she had her sleeve, and she also had two kids.

Professor Ali was straight to the point, he didn’t hold any punches and to be honest, that was what I needed. He said to me, “this will only work when you work with it. You will only get the result that you desire if you work for it.” He made me realise that you can’t just have the sleeve and go back to eating 4 takeaways a week.

It was a huge reality check and culture shock because it was so hard hearing if you keep on going the way you’re going, there’s no doubt about it you will die. And it made me think about what my kids are going to do because I’m a single mother. I’m killing myself by eating myself into an early grave and it’s only up to me to fix it.

But I honestly can’t fault Mr Ali, I’d love to be able to sit and meet up with him now to thank him for everything and show him my progress from this time last year. I had my surgery 3 days before lockdown hit. Don’t get me wrong lockdown was hard enough for people, but being locked down whilst going through a life-changing operation and knowing you can’t have food as a comfort was pretty tough.

A couple of my friends were getting married but I was always known as the ‘fat friend’ so it was always like, well, we need to get dresses that are plus size and multi wearing. It was hard because all my friends were size 8, 10, 12, and when I was at that bigger size, I felt like I couldn’t be who I wanted to be and I was just known as the fat comfort eating friend. We’d go out and everyone would be like, “Nikita are you gonna have a kebab.” It was not how I wanted to be known, and I’m so glad that I can put all of that behind me.

The only people that really knew to start with were my mum, my dad, my daughters and a few close friends. I didn’t want people to know because it’s so personal. I had to get myself used to it before I announced it to the world.

On the day of surgery

I was in shock because I’d never been to a private hospital before. I went in thinking it was going to just be an ordinary bog-standard hospital room, then when I walked in and saw the bath and the shower and everything, I took a video and I was like… “it’s true! It honestly sounds bad but you get what you pay for!” The nurses and everything were brilliant. I honestly can’t fault them whatsoever. 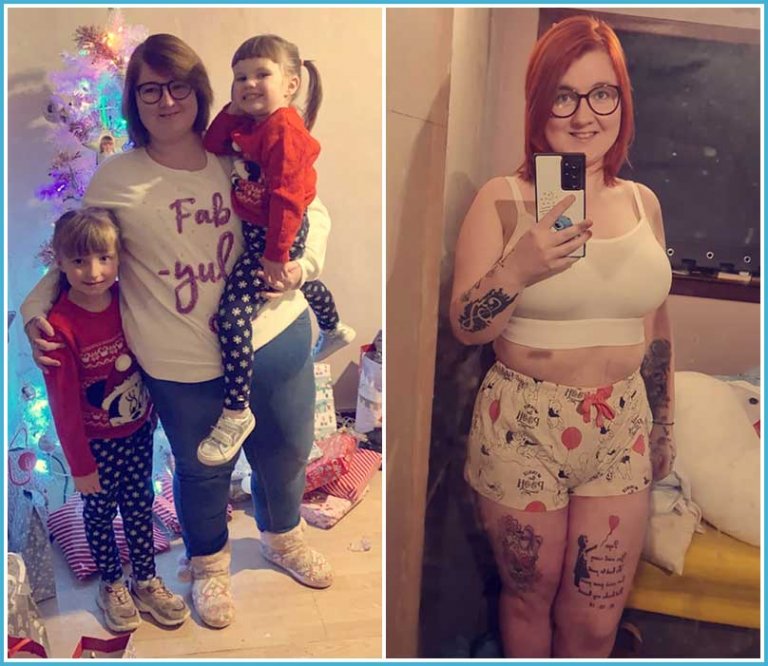 How my life has changed

Now, I’m able to do a lot of things that I never dreamed of – like go to a trampoline park, run about after the kids, go cycling, it’s just been a whirlwind. Stuff that I never used to be able to do because I was too big, I can now do with ease! I’ve got better general fitness, I’m basically just a happier and healthier person.

Before my gastric sleeve, I would probably have 4 slices of toast for breakfast, 2 pot noodles or two sandwiches and crisps for lunch and just tonnes of crap basically. My dinner would have either been a takeaway or just something fatty and processed. Whereas now, I cook everything from scratch, everything is homemade which is great for portion control. There’s only two of us on the night shift and we used to get takeaways to share between the two of us, but now I take my own food in, and I find it so much easier.

I used to love cooking and I used to bake all the time and do a variety of things, but I lost touch with that and I was a bit gutted. But now, I love my cooking and I do my meal planning, I always meal plan so that I know if I’m cooking I’ve got stuff to take to work.

Meal planning is a huge thing, especially when you’re sleeved or have gone through any bariatric surgery because each day is different in the way that you feel so you need to gauge what you’re eating.

Out with the old and in with the new

We went shopping recently and Tony said to me, “I really think you should look at getting some new clothes” and I was like, “I can’t buy from a shop, they’re not going to fit me!” So I started trying in tops, I tried a size 18 on and it was too big, then I tried a 16 and that was too big, so I tried a 14 on and it fit! I went down 4 sizes and I didn’t even realise.

I was always tending to buy the bigger sizes because that’s the way I see myself as still this big person. Everyone got me vouchers for clothes shops for Christmas! It’s nice to be able to walk past the plus-size section. Before my surgery, I wasn’t dressing for my age, I used to have to buy old woman clothes because the clothes that I wanted didn’t fit. I felt like a wee old woman! Whereas now, I’ll wear anything!

My mum had bought me a mirror for Christmas because I was doing a lot of makeup. Before my gastric sleeve surgery, I just couldn’t bring myself to look at it. I told my mum that I wanted her to take the mirror away until I sorted myself out and I felt comfortable enough to look at myself in the mirror again.

The next Christmas, I got it back! So within a year, I managed to build my confidence up enough to actually look at myself in the mirror again which was such a nice feeling! It is a mental process, I think when you get yourself into that sort of situation and you don’t know where to turn to or what you want it’s hard. But you get there in the end!

It’s still a journey, even though I’m a year post-op, I’m still learning, I’m still losing and I’m still finding myself. It’s a lifelong journey, but I’m so happy with the way that it’s going!

If I could say anything about Dr Ali is that he’s saved my life because he’s given me the opportunity to be me again!

Editor’s note: Nikita was 22 when she had her Gastric Sleeve surgery with Healthier Weight.
Page last reviewed: 07 May 2021